Last week was Living Wage week and Scottish Labour held a debate in Parliament calling for the wage to be the ‘expectation not the exception’. With over 400,000 workers across Scotland earning below the living wage, including 26,000 in Fife, during the debate calls were made for the Scottish Government to extend payment to all public sector contractors.

The minimum wage was introduced in 1999 but I believe that now is the time to go further. The figures mentioned above from accounting firm KPMG highlights the need for action. The fight for fair pay is sadly far from over.

Earlier this year I supported extending the living wage to staff on public contracts just as I supported colleagues during the debate on the 5th. Unfortunately the Scottish Government failed to support both calls. 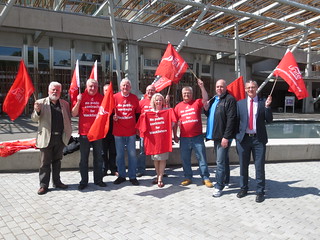 It is clear that the living wage will make a huge difference to people across Mid Scotland and Fife as we already know that many people who are in poverty are in work. It is vital that it is promoted in low paid professions such as cleaning, hospital and retail.

During the debate calls were made for the introduction of a Living Wage Unit and a National Living Wage Strategy which will be accountable to the Scottish Parliament. The plans will target specific job markets and areas to deliver a pay rise in jobs. I support these plans.

The Scottish Government can do more. It is time to get serious about better pay for workers in Mid Scotland and Fife.

I along with colleagues support the introduction of a Low Pay Action Plan that would:

• Make work pay contracts which will see a £1,000 rebate to companies who pay the living wage

• Ban the use of exploitative zero hours contracts