On Thursday I held my members debate on local organisation Greener Kirkcaldy, following the debate we both teamed up to lend our support to WWF’s Earth Hour which takes place on Saturday 29 March.

The members’ debate followed my motion submitted following Greener Kirkcaldy’s annual gathering. The community based charity helps locals take action to ensure environmental issues are being tackled both at home and in the wider community.

It was great to get the opportunity to support and debate the hard work of Greener Kirkcaldy in the Scottish Parliament and promote their work to other MSPs and the Scottish Government. 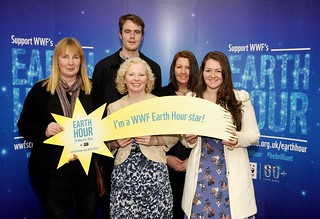 For Scotland to meet their climate change targets the work of Greener Kirkcaldy and other environmental charities will be invaluable. I have signed up for one of their free home energy checks and would urge readers to do the same as it could help lower their household energy bills.

Greener Kirkcaldy have run initiatives such as Shine on Fife and Cosy Kirkcaldy and currently there are plans for a consultation for a community food hub.

A video of the debate can be found below.

It was also good that the debate coincided with WWF’s earth hour promotion and I am delighted to once again sign up to support the initiative. I hope people from across the Kingdom will join me in switching off their lights for one hour on the 29th of March.

Earth Hour will take place at 8.30pm on the 29th when millions of people across the world will switch of their lights for an hour to show their support for those threatened by climate change.

I also signed up to take action beyond the hour to tackle climate change.  I signed up to introduce new measures to reduce our own emissions in Scotland, including reducing emissions from our homes, transport system and from our energy production.

“We’re very pleased Claire Baker MSP chose to highlight our work in parliament and also for the kind words and recognition from other Members.

“A number of our staff and volunteer team were in attendance for the debate and were very happy with the response and genuine interest in the work we do.

“We were pleased to be see a good turn out and interest in parliament for WWF’s Earth Hour. That is Greener Kirkcaldy’s next big focus and it’s great to see so many elected members being involved in its promotion.”